I have been meaning for a long time to post one of my score book games here. Now I finally am. This is the Visitor's page from yesterday's White Sox vs Twins game. Most of the codes used are from STATS Inc with my own slight variations. The color coding took me a while to find something functional but not a major Pain In The A during games to do. Black for almost everything. Blue for substitutions/lineup changes and for base hits. Red for Strikeouts and Strikeout plays (e.g. K 2-3). Green for non-At Bat items (BB, SAC, SF, etc).

Would love comments, questions and feedback. 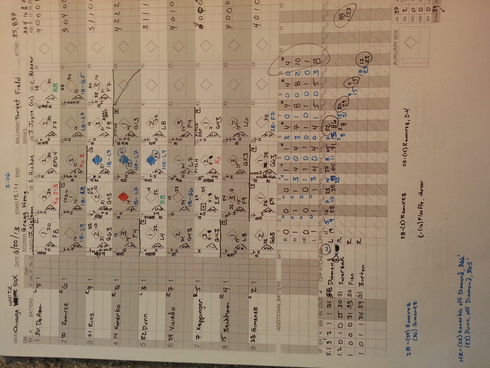 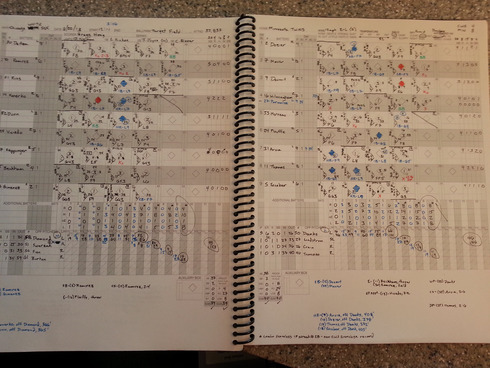 Another small style explanation. For the 'blank space data' (list of BK, WP, etc) I try to follow a convention to make it easier for me to double check for missing items. I make 3 columns, the left is typically the extra base hits. The middle column typically lists items for the defense (WP, E, OF Asst, etc) where I will look up the name between innings. The right column is everything else.

It is not a hard and fast convention (yet). Sometimes things get hectic scoring in a book, announcing scoring decisions and entering the plays in the system and I just write it down where my pen happens to hit the page.

Runs...
When I use pencil or one ink color it is pretty easy. Completely filled in is Earned. Outlined is Unearned.

On occasion I use both colors. When I see this I know that it is an Earned Run. What happens for these is when a run scores and at the time they are undetermined but later events turn the potential Unearned Run into an Earned Run. For example, with 2 outs R3 scores on a PB. If the batter gets out on the next pitch it will be an Unearned Run, so I mark the run in Red. But the batter instead hits a HR making both run Earned. I then overcolor the first run with blue (it will have both colors).

Thanks for the scoresheets.
I'm amazed you can keep up with colors!
I like your 'blank space' info. I hadn't thought of doing the SB/CS here, but it's a nice way to keep track so it's not lost in the sheet noise. The columnar organization is also an improvement over anything like that I track.
I wouldn't like colors for earned/unearned because it takes me a while to determine it but the run is still scored (as you point out). I use a little check-mark for earned or a little "O" of unearned near the diamond. I can do this much later after I've had a chance to reconstruct the inning, for those times it's not obvious at the time it scores. I also prefer circles for the runs to keep the ink away from the running lanes in case there is baserunning info along those lines, I don't want to obscure it.
I like your pitch count summaries by box. I do a similar thing with slightly different location.
Do you write the batter's number in the box when he comes to the plate? I can see how that's advantageous for PHs later in the game.
What do the asterisks mean in the run boxes? starts 4th inning of sox' sheet and 6th inning of twins' sheet.

I learned to do colors from one of my mentors at the Minnesota Twins games. The colors for earned/unearned came about because sometimes while scoring the decision is not determined until the end of the inning. I needed a way to mark the run while giving me a visual that I have not announced the decision AND still allow for the run to go either way.

There is too much going on for me to try to find things. I need them to stand out. Between innings I barely have enough time to confirm pitch counts, scan and announce (and enter into the web system) subs and get some water.

I write the batter's numbers for their first at bat (I'm willing to have scatch outs if something freakish prevents a player from getting their 1st AB). But you're right, after that I do it as the batter comes up so I can catch any PH or PR.

Asterisks are my visual that runners are the responsibility of a previous pitcher. 1 asterisk is the pitcher before, 2 is a runner that belongs to 2 pitchers ago (I have gone that far in a game) and the worst case scenario is needing 3 asterisks.

Now that I am scoring in the Arizona Summer League (Rookie level MiLB) I ended up tweaking my system for earned/unearned. It seems at this level when the unER happen they happen in bunches.

I still use red for unER and blue for ER.

But when I need to wait for more of the inning to decide then I use a black outline for that undetermined run. Once I decide then I fill it with the correct color.

This helps me to know that I have undecided runs still out there.

I finally...tried your scoring system. I can say without a doubt that I will never go back. Bases loaded situations are much, much easier now, and I can record so much information in such a short time period thanks to the nice short-hand that's part of the scoring system.