Postseason innings, all 18 of them

OK, here's something a little more challenging - my scorecard for last year's NLDS Game 2 between the Giants and Nationals, all 18 innings of it. For obvious reasons, one of the most challenging scorekeeping nights I've ever had. There was the length, of course, and the emotional devastation... and the damp sub-50-degree wind in my face didn't help either. To be honest, this was such a workout that I spent the winter exploring iScore to see if it would make my life easier (it doesn't - it's just as much work and it scatters information in a way that makes it really hard to reconstruct the game afterward.

Apart from trying to keep on top of things, the big issue here was when to break onto additional pages. After some experimentation, I settled last year on a strict policy that I'll go to the next page after 12 innings, since that's when I run out of summary columns for each inning. It can look a little odd when the game ends in the 13th, which happened to me once. But clearly that wasn't a problem here.

My four pages follow, one below and the rest in additional posts. 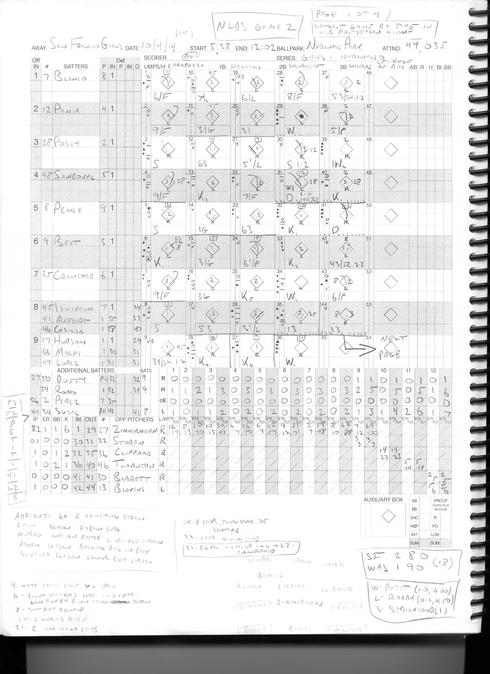 I like your method of keeping a running count of strikeouts and walks. I use tick marks down in the totals boxes but I think I prefer your method. Might have to steal that for my next game. 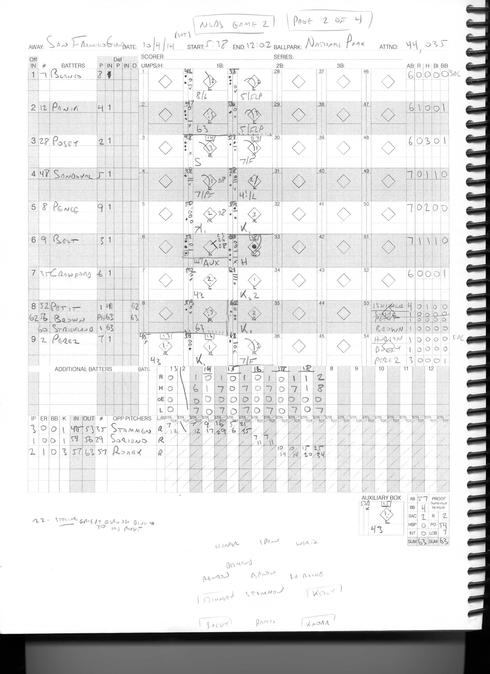 ...and page 3, which starts the Washington scorecard... 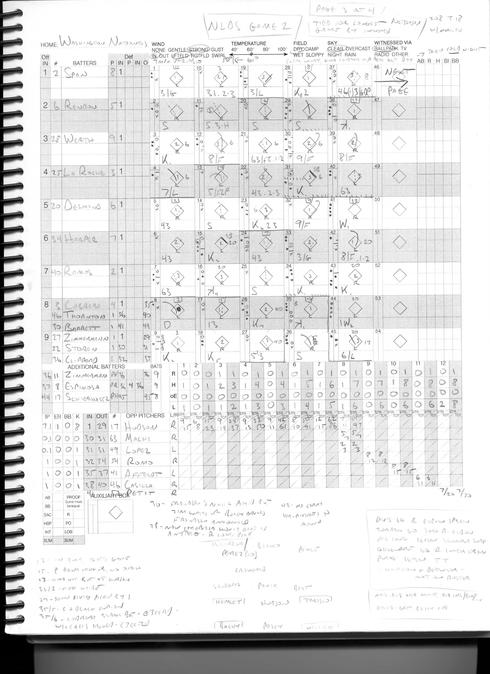 ...and page 4, the rest of Washington's evening. 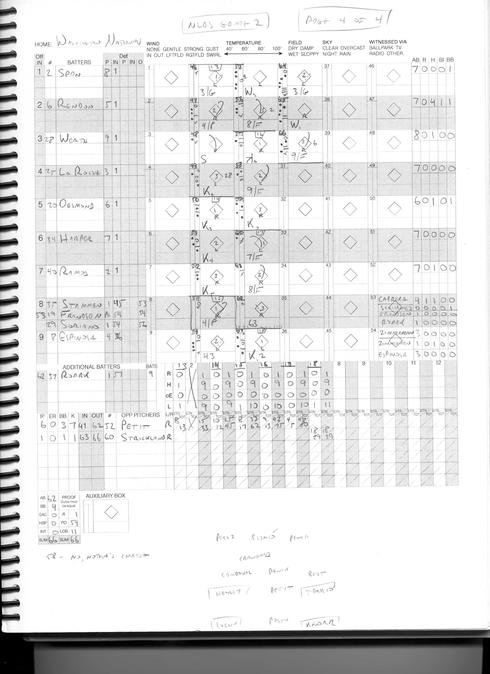 ...and my apologies. I don't know why these posted in reverse order. But I hope that the page markings will help you find your way.

This is pretty fantastic.

I have also struggled with when to move to the next sheet.

When scoring in the American Association I had a 9 inning high scoring game with so many walks, HBP and errors that I needed a second page for one of the teams. At that point my decision was when I hit box 55 I would move on. Makes the end of game tallying easier. But having just 4 batters on a sheet...well, that looks silly.

Recently I had an AZ MiLB game with lots of runners and by the 6th I started hoping for 1-2-3 innings while contemplating what I would use as the Page Break Decision. Luckily the rate of runners nearly ceased and I did not have to break.

Go by innings and you will not have the potential of 4 batters for the whole sheet. But tallying and confirming final totals is not really as quick as I would like (instantaneous would be best when coaches are itching to see the copies). Go by box number and the tallies are much smoother but the risk of only one team on a sheet or only a handful of batters on a sheet exists.

Thanks for you sharing. Love it!

First off I must say that I love the scorebook. Besides the scoring system itself (which I really like), I like the stiff card stock that you used for the back of the book. It actually gives you something to write on. The other scorebooks I've used usually just have flimsy backs that end up leaving your scorebook curved in the shape of your leg by the end of a season.