I've started writing the times at the end of the innings so I get in the habit and don't forget the game's ending time.

A check mark is a checked swing, so in box [5] "he went". On an open circle, he held up but it was called a strike.

Someone help me with proper notation on a line drive and doubling someone off box [21]. I don't think I'm doing that right.

Boxes at the bottom are the defensive numbers in the field, helps me with the *actual* defense. I will sometimes fill in the position boxes if I have that before a game, but it almost never survives beyond the first inning, so I note it as I go. This is not needed in pro ball where they actually tell you what's going on, and there's limits on substitution.

I add "K" to batters columns. I add "H" to pitchers columns and "HBP" only if there is one.

By the way, I am going with 100dpi scan, which is pretty 'low' but makes a sub-MB picture that is quite clear, for those of you contemplating uploading sheets. 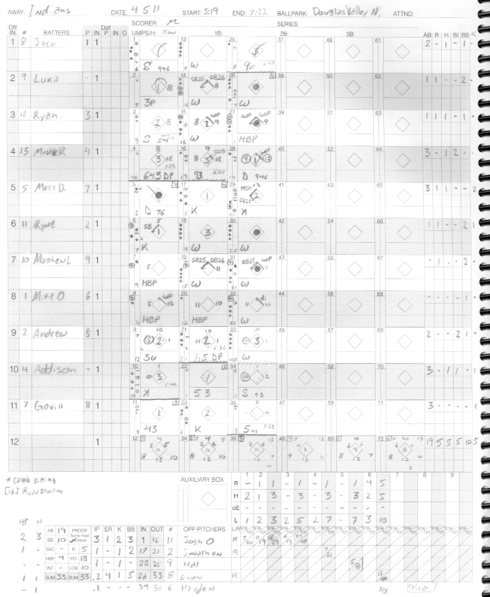 The checkmarks next to the runs are "earned". A little "u" for unearned, this is usually well after the game when I'm contemplating reconstructed innings.

box [16] I put the hashes in on the pitch columns first, and then finish it later. In this box, the new pitcher gave up a single, so it's his batter (previous pitcher was ahead 1-2). Had he struck him out, it'd be the previous pitcher's credit, or whatever rule 10. says. I try to finish the hash at the field, but sometimes I'll let it go until I can look up the rule.

box [22] & [23] I don't always like how I note the basepath movement. Here's a single to center, that the cf let get past him (E8) for an extra base. So there he sits on [23]. Here's one of those from the Earned/Unearned discussion. I called him earned, because without the error he's at 1st, [23] still at 1st, [25] now at 2nd, and the effects of the error are no longer relevant to his earned/unearned status. 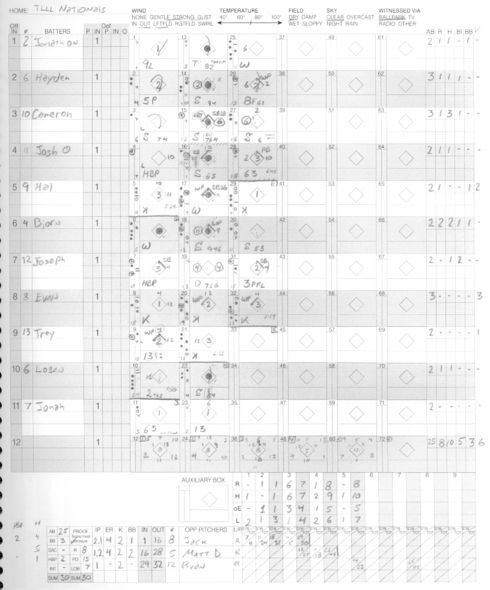 Thanks for uploading the scorecards. It's great to see them being used in the challenging world of little league baseball.

Writing down the time at the end of each inning is a really good idea. Not only does it get you in the habit so you don't miss the game ending time, it's good information about each inning!

The only thing I'd change in visitor sheet box 21 is to use "LDP" so you know that the first out was the catch of a fly ball, not the pitcher fielding a grounder and throwing to the third baseman who tags out the lead runner adn then steps on third (for example). In general it's a good idea to use "GDP" and "LDP". If you want to be really explicit you could even write 1(B)5(3)LDP to show that the pitcher put out the batter and the third baseman put out the runner on 3rd, but in most cases which runners were put out is obvious.

Thanks Alex,
LDP is obvious, but somehow my brain had chucked using it. Thanks for the reminder.
At the field I often will just cross off the runner and figure out where that out belongs later. Speed of recording competes with completeness of information sometimes (thinking about 1(B)5(3)LDP...which I'd probably write "15" and now "LDP" and cross off the runner from 3rd. Then put the out number on the current box e.g. "1" and then wander back to the R3's box to put his "2" in his fate diamond. Fast first. Slower later, but if everything I really need is in that current box, I'll always be able to catch up sometime. I could even catch up and write the verbose version if someone else was going to be reading my sheets).

Which reminds me of an insane play from the other week.
Runners on 2nd & 3rd, 1 out.
K+WP E2(th)76(2)2DP
Well, it wasn't actually a double play as the throw hit the R3 in the leg so no out, but it could've been one of the most unlikely DPs I've ever seen. As it was, run scored, and runner on 1st and now 2 outs.
And that was the older kids!

Your system is one of the few variations that genuinely takes a different approach to the traditional method and I've really enjoyed using it ever since having it recommended to me prior to the 2008 season.