Someone had asked for a pro game sample. I finally made it to my first AAA pro game here in Colorado Springs, so here's that game on a pro 9-batter sheet.

Fun game to score, as there were many times I disagreed with the Official Scorekeeper, but each time he came around to my point of view ;-).

My notes show most of that.
For exmample you can see on the home sheet, box 16 where the hitter put one into left field, and he made an excellent throw to the plate to cut down Jorge Cantu. They didn't credit the hit at first, but then did a little bit later, but slow enough I felt obligated to write the note on my temporary disagreement.
On the visiting page, more examples.
Box 18 wasn't fixed until after the game. Pitcher (PITCHER!!) bunts the ball right in front of the plate for an OBVIOUS attempt to sacrifice. Catcher double-clutches the ball AND throws wide. SH+E2. no brainer. They gave him a hit!?!?! I erased to comply with OS, but I wrote the note. When the box was published all the talk was about the unearned runs from this error, so it was fixed.
[26] is an interesting one. The Batter hit a nice one to right field and should've had a double, but he overslid the bag and was tagged out, making him only get the single and out on the play.

I'm very interested in corrections to notation (with or without project scoresheet background).

You can see where I've added "K" column on the box totals, which is pretty standard habit of mine now. Also the "HB" and "H" columns for the pitchers is pretty standard (I only stick HB on there when someone actually gets hit by a pitch).

Looking at the official box, I see I don't put the pitcher in the batting column unless he bats. I suppose that could be a little confusing, so I'll have to think about that. How would you do that?

By the way, the upper right side of home sheet is marred by dropping my book right after my neighbor's kid dropped his soda. The whole book is warped from past rains. A lot of character, but the paper is heavy enough I'll still be able to get good use from the book for some time.

And the official play-by-play.
http://web.minorleaguebaseball.com/milb/stats/stats.jsp?sid=t551&t=g_log&gid=2011_08_07_mrbaaa_cspaaa_1

I can't say I rectified them down the line, I only checked my disagreements. 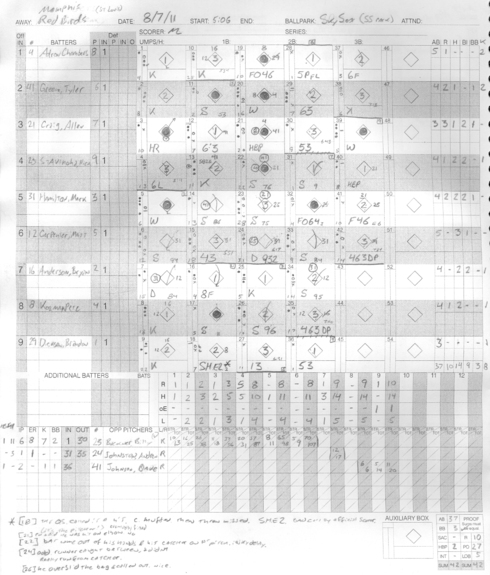 And the other sheet.

I'm realizing after that SH fix, the proof is off a bit. One of those ABs moved down to the SAC box, so it still balances, but isn't exactly what you see in the score.

Oh, I noticed a couple of other things. I was happy my time of game was within a minute of official. Little thing. More of that noting the time after each inning.

My pitches was off by 9 on Dickson. I added 10 in from the 6th inning, and then dropped a pitch somewhere. Also missed a strke for Johnson, but I think it was either the [40] HBP or [41]E6 where I lost the count before the PA resolved. Hey, a guy's gotta buy that 50-cent hot dog sometime! 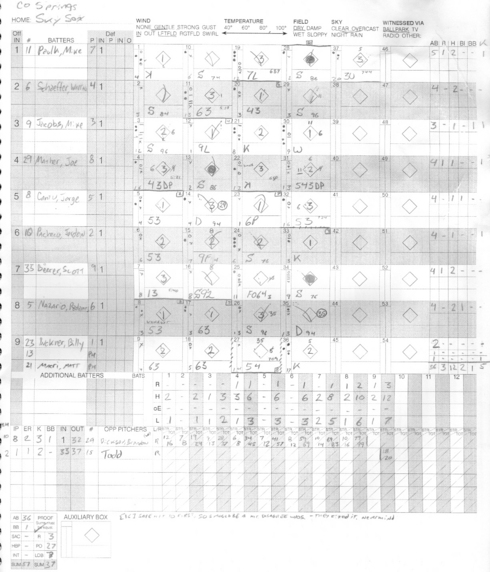 I love the [Reisner] system and the books. I'll just be cracking into my second book here after the break.